If you want to take your baking to the next level then your next investment should definitely be a stand mixer! But stand mixers can set you back a fair penny.

I’m sure you’ve heard people talk about how amazing the KitchenAid stand mixers are, but are they really worth spending half a grand on? The short answer is yes. They are absolutely worth it! But not everyone is able to splash that type of cash.

I have owned cheap stand mixers and expensive ones, and it is fair to say that you really don’t have to spend much to get a good quality mixer.

So, let’s find the best stand mixer under 100 dollars for you! 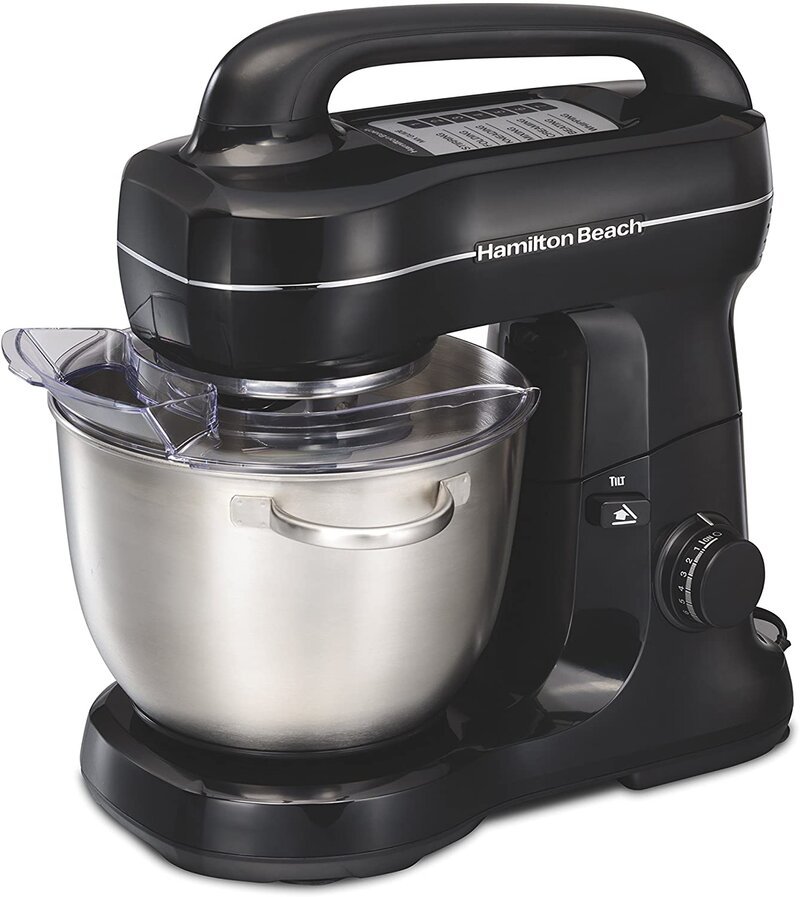 The 7 speeds go from a slow stir to a fast mix, and it boasts a 300-watt motor and a 4-quart bowl capacity. What makes this stand mixer stand out from the rest is the guide printed at the top of the mixer that shows you which speed to use depending on what you are mixing. The Hamilton Beach Stand Mixer also features a tilt-back head, making it easier to add more ingredients or change attachments.

With the Hamilton Beach stand mixer, you get a dough hook, a whisk, a flat beater, and a splash guard.

Baking tip: Although it claims to have a planetary mixing action that mixes everything, you may still have to scrape and mix the ingredients at the end with a spatula. 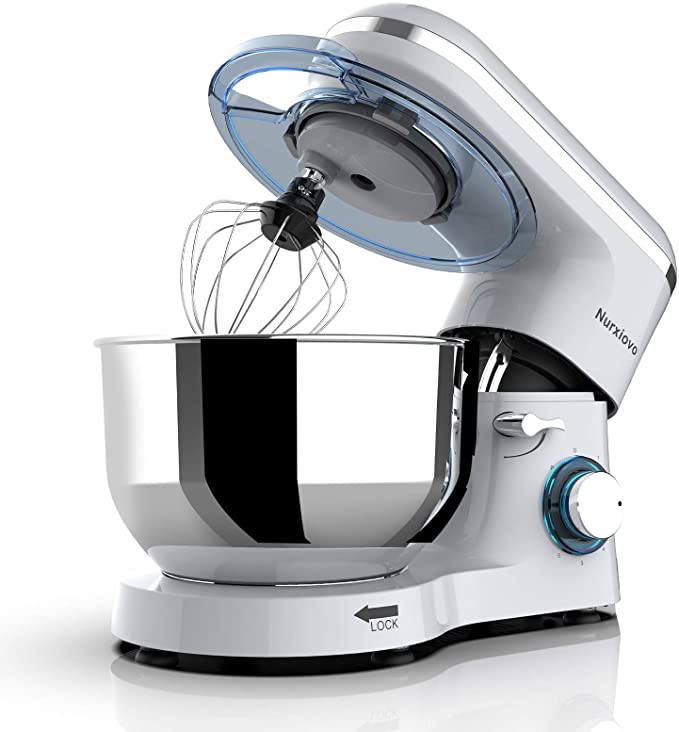 The Nurxiovo is a great stand mixer under 100. It features a powerful 660-watt motor and 6-speed options plus pulse function, giving you access to an abundance of recipes you can make.

The Nurxiovo stand mixer has strong suction cups that provide stability with limited vibrations. Meaning you can just walk away without worrying that your stand mixer will fall off the side of your kitchen top!

With your Nurxiovo Stand Mixer, you’ll get a splash guard, dough hook, whisk, and a beater which are all easy to attach and release from the mixer. You also get a large 6.5-quart mixing bowl, which is big enough to make large batches of all your favorite cakes!

Baking tip: Attachments are not dishwasher friendly but the splash guard is. 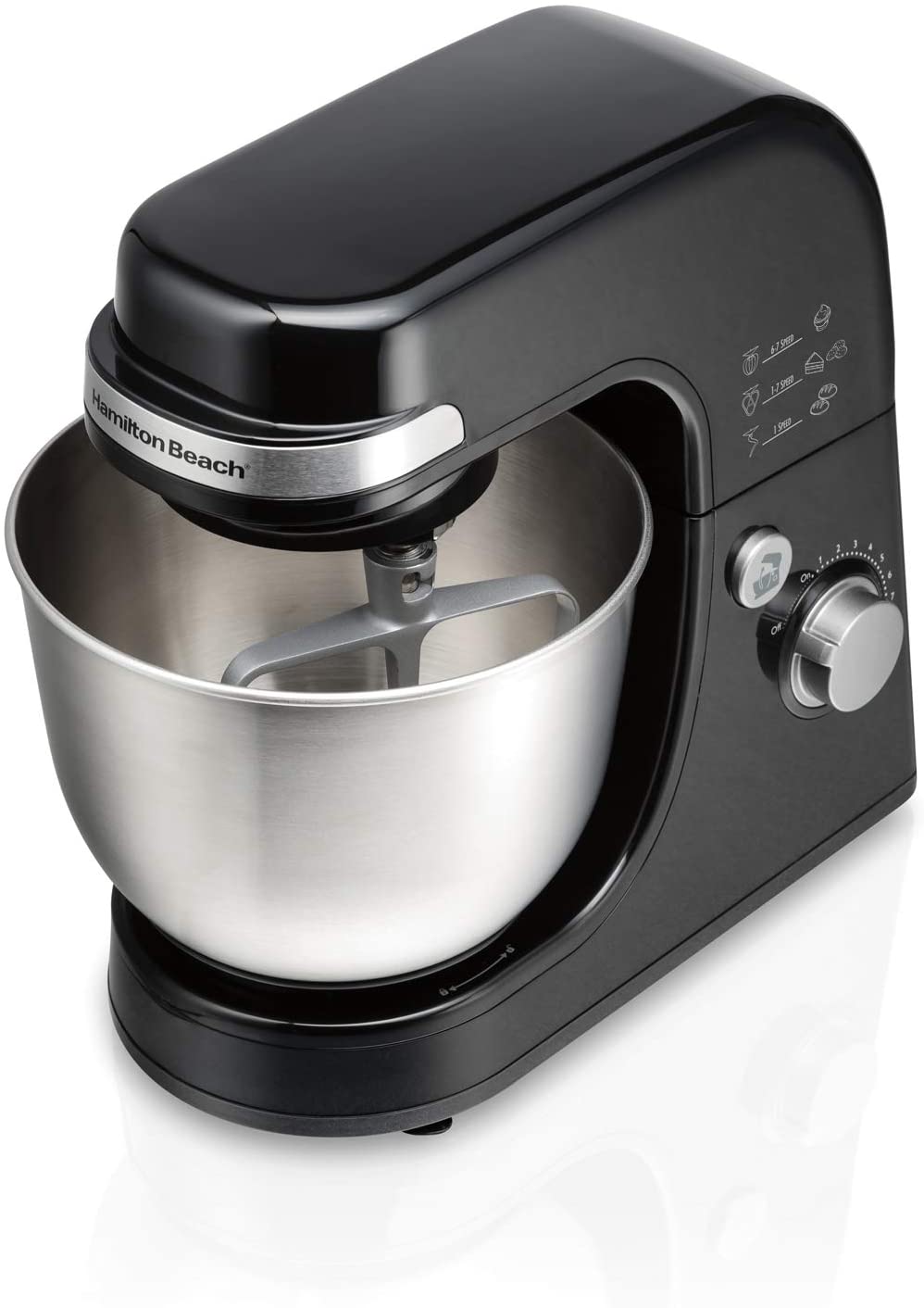 With 7 speed settings that can power through the toughest of doughs or whisk up the fluffiest meringues, you know you are getting a quality stand mixer for under 100.

With your Hamilton Beach Stand Mixer, you get a dough hook, flat beater and whisk, as well as a splash guard.

The only real difference between this Hamilton Beach Stand Mixer and the first one is the price, the design and the size. Other than that, they both work in very similar ways.

Baking tip: Due to the stand mixer being very light, it tends to move around a lot when mixing. 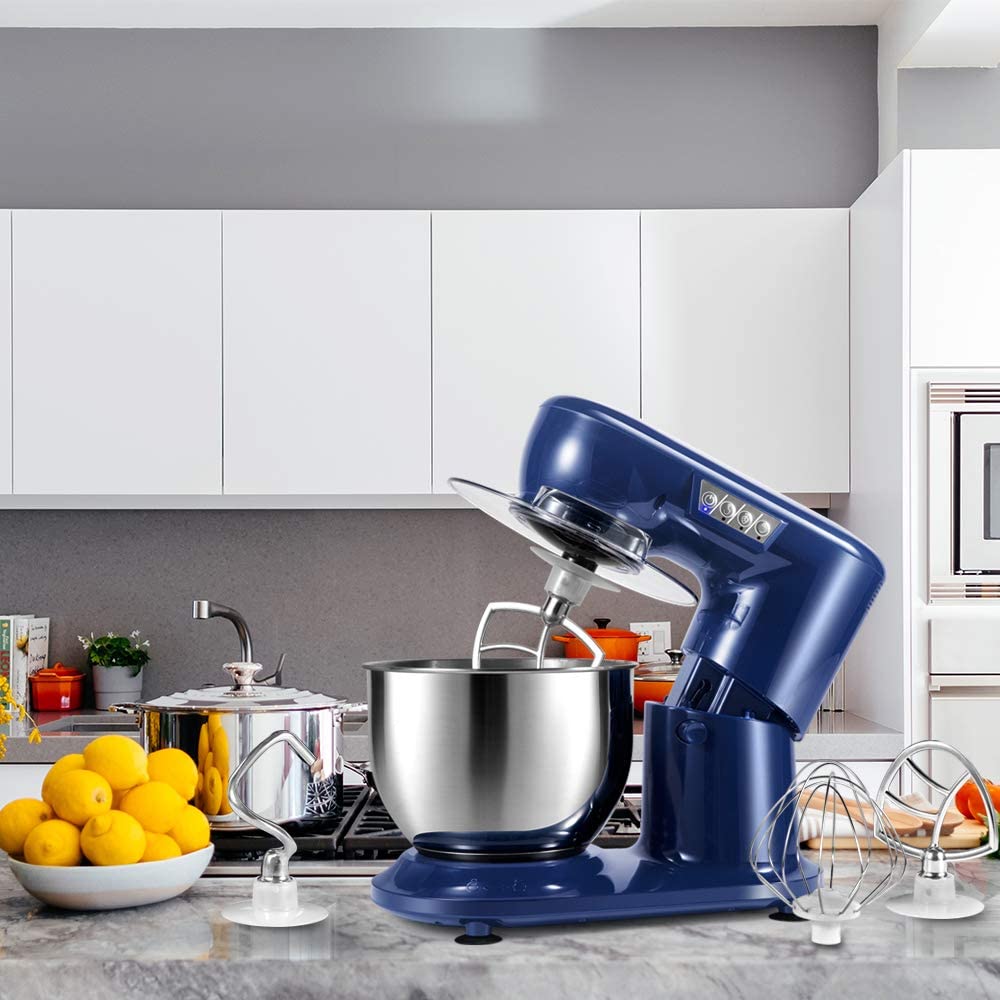 Aifeel may not be a very well known brand, but when it comes to a budget-friendly stand mixer, this takes the win! With an 800 watt motor and 4.3 quart stainless steel mixing bowl, you get much more than what you want for $79.99.

The Aifeel features an overheating protection mode which automatically stops the mixing process when it starts to overheat, ensuring safety at all times. The manufacturer suggests you don’t use the stand mixer for longer than 8 minutes at a time to avoid it overheating. This could be a bit of a pain, though, if some recipes require you to mix for longer.

What makes this stand mixer different from the rest is that instead of having different speeds, it has 3 preset speeds depending on which attachment you are using. If you’re used to working with different speed variables, then this might take a while to get used to. But for some, this could be a game changing feature as it decides the speed for you without you having to guess.

With your Aifeel stand mixer, you get your standard dough hook, flat beater and whisk. You will also get a splash guard with an opening so you can add more ingredients to your batter.

The Aifeel also features anti-slip feet for steadiness and a tilt-back head design which makes removing the mixing bowl and attachments easier.

Baking tip: It’s quite a noisy stand mixer and the suction feet are not as strong as you’d think.

So, there you have it. The best stand mixer under 100! Now, which one you get is completely down to preference. But there is no excuse not to get one as they are all incredibly budget-friendly.

If you are looking for a top-quality stand mixer that acts and looks like a high-end product, then we would definitely recommend the Hamilton Beach Stand Mixer. It’s a reliable appliance that looks great, works a charm, and is a fraction of the price compared to some other ones out there.

Moms Baking Co.? is a participant in the Amazon Services LLC Associates Program, an affiliate advertising program designed to provide a means for sites to earn advertising fees by advertising and linking to Amazon.com

This website uses cookies to improve your experience while you navigate through the website. Out of these, the cookies that are categorized as necessary are stored on your browser as they are essential for the working of basic functionalities of the website. We also use third-party cookies that help us analyze and understand how you use this website. These cookies will be stored in your browser only with your consent. You also have the option to opt-out of these cookies. But opting out of some of these cookies may affect your browsing experience.
Necessary Always Enabled

Any cookies that may not be particularly necessary for the website to function and is used specifically to collect user personal data via analytics, ads, other embedded contents are termed as non-necessary cookies. It is mandatory to procure user consent prior to running these cookies on your website.