Sure, there are countless well-designed and technically brilliant stand mixers out there but that doesn’t stop the baking masses scrambling to get their hands on an iconic KitchenAid every year.

The undeniable fact is that these mixers are the epitome of luxury kitchen countertop appliances. Their award-winning design, robust ‘made in America’ build quality, and century-long rule as pioneers of the stand mixer revolution are just a few reasons how KitchenAid has managed to build a legion of loyal fans.

With over 100 years of making stand mixers, to say that KitchenAid has an extensive range is probably an understatement. The company currently has over 10 models in their line – and that’s just in the USA alone! That number doesn’t even include the exclusive machines made for retailers like Target or Costco.

In case you haven’t guessed already, I’m a big fan of these mixers. I think there is a perfect KitchenAid stand mixer out there for everyone.

Some of their mixers have powerful motors that are perfect for commercial kitchens and large families. Others come in a huge variety of colors designed for fashion-conscious bakers. Some are even designed to attract bakers on a budget, those who might not have $500 to spend on a new stand mixer.

What about those of us who are short on space? What is the smallest KitchenAid mixer currently available?

I have done the digging into the smallest KitchenAid mixers and ranked the five most compact models below.

Want to learn more about these mini machines? Read on!

If you are short on space, or simply don’t need a monstrous 7-quart mixer, then here are a few great mixers you should take a look at. Touted as a smaller version of the Artisan 5 Series, the Artisan Mini is the latest entrant to the KitchenAid mixer family.

Although it only comes with a modest 250-watt motor, don’t let that fool you, this little machine packs a serious punch. Thanks to its DC motor, the Artisan Mini can produce the same amount of torque as its big brother, the Artisan 5 Series.

The Mini is currently the lightest and most compact KitchenAid stand mixer available. To put things into perspective, the Artisan Mini is 20% smaller than the 5 Series and also weighs 25% less at just 18 pounds. It’s perfect for mixing up to five batches of cookies or a couple of cakes. It’s also more than capable of kneading dough too.

Although it doesn’t quite have the same color selection as the 5 Series, the Mini still comes in 20 different colors, ranging from Silk Pink to the iconic Onyx Black.

Perhaps the biggest downside to this mixer is that you can only use a 3.5-quart bowl, as there aren’t any bigger replacement mixing bowls that are designed for this machine.

It’s not all bad news though, you do have some great choices of 3.5-quart bowls, made from either stainless steel or glass. You also get a flex beater that comes standard with the Artisan Mini, the only model to do so. After the Artisan Mini, the Classic is what I could consider being the next smallest KitchenAid mixer. It has a smaller bowl capacity, motor, and price tag than the remaining mixer models.

Although KitchenAid Classic uses a 275-watt motor it uses alternating current, as opposed to direct current, so it is actually less powerful than the Artisan Mini. It also weighs more too, tipping the scales at around 25 pounds. It’s slightly talles. standing at 13.9 inches tall, which is the same size as the Artisan 5 Series.

This machine comes in a handful of basic colors and comes standard with a 4.5-quart mixing bowl with no handles, although there are plenty of great 5-quart replacement bowls available.

Price-wise, this is the cheapest KitchenAid mixer on the market, so perfect if you are baking on a budget. If you want to splash out and opt for an upgrade in the motor department, then you should have a look at the Classic Deluxe with its 300-watt motor and similar features. As the older and bigger sibling of the Mini, the Artisan 5 Series is taller, heavier, and of course, pricier. The Artisan contains all the features of other compact versions and some more. The 325-watt motor drives this appliance, offering a bit more power than the Classic models.

One reason for the huge popularity of the Artisan is down to the sheer number of colors offered – more than any other mixer model – and comes in almost every shade and hue imaginable.

Color aside, you’re spoiled for choice with mixing bowls. Glass, stainless, ceramic bowl, with or without handle, painted or colored, you name it and you have it.

With the Artisan 5 Series, you can easily bake nine batches of cookies or brownies. Mixing bread dough is much easier because of a more powerful motor.

When it comes to dollars and cents, these are on the higher side of KitchenAid stand mixers designed for home use. Like the 5 Series, the Design is fitted with a 325-watt motor, this mixer weighs 29 pounds and is 13.5 inches. Differences between the Artisan and the Artisan Design are few and far between, but perhaps the biggest difference is that the Artisan Design comes standard with a glass bowl instead of the standard stainless one. You also get the more visually appealing silver-coated mixing attachemnts instead of the standard white nylon ones.

This model is slightly costlier than the Artisan series but is smaller enough for small kitchens. The bowl-lift mixers are usually heavier than their tilt-head counterparts and need more counter or storage space as well. With seven color options, these mixers tip the scales at 29 pounds and stand 16.6 inches tall.

This mixer along with Artisan and Artisan Design doesn’t have the soft-start mechanism which gradually increases mixing speeds.

Professional 5 series get a sturdier 525-watt motor and are bundled with a 5-quart stainless steel mixing bowl with handles. You can also add to your bowl collection a 4.5-quart bowl made with different materials.

The best part is that this series has an optional 3.3-quart mini bowl you can purchase for those small single-batch goodies.

Perhaps the main reason why some bakers might want a small Kitchenaid mixer is for the space-saving benefits. After all, not all of us have the luxury of having a spacious kitchen.

Some of us (me included) live in small homes with a tiny kitchen, which is crammed full of appliances and cookware. If your kitchen sits on the smaller end of the scale, a compact stand mixer would certainly make life much easier as well as significantly help declutter your countertop.

Or, perhaps you only ever make small batches of bready and tasty treats. In which case, having a giant 7-quater monster to whip up half a dozen cupcakes is definitely overkill.

It’s not a countertop space small stand mixer save on either, the smallest KitchenAid stand mixers are also significantly lighter too. Some models weigh quite a bit, the heaviest of which, the Professional 6500 Design, clocking in at a weighty 37lbs.

Here you have it.  Some of the smallest and lightest stand mixers from KitchenAid. Each has its plus and minus points.

If you want a light machine that can handle bigger loads and comes with a better motor, you always have the bowl-lift style Professional series.

A Professional 5 is a better buy for bakers who knead bigger batches of bread dough or cake batter.

Want to buy power-intensive attachments like a food grinder? A bowl-lift mixer is more useful to get it done faster.

Base your mixer purchase on what you will use it for and how frequently. The less powerful Classic and Artisan Mini are perfect for simpler baking requirements. 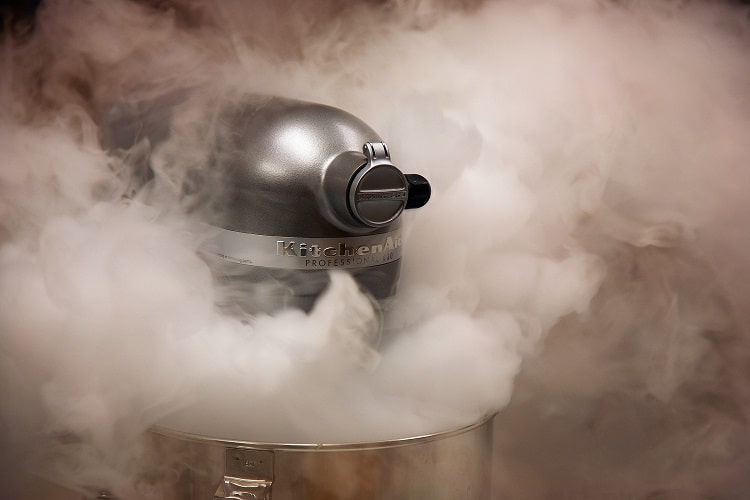 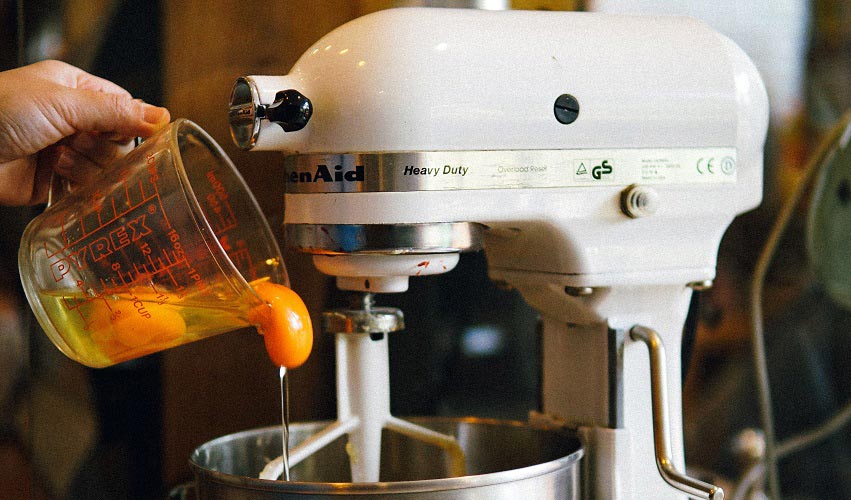 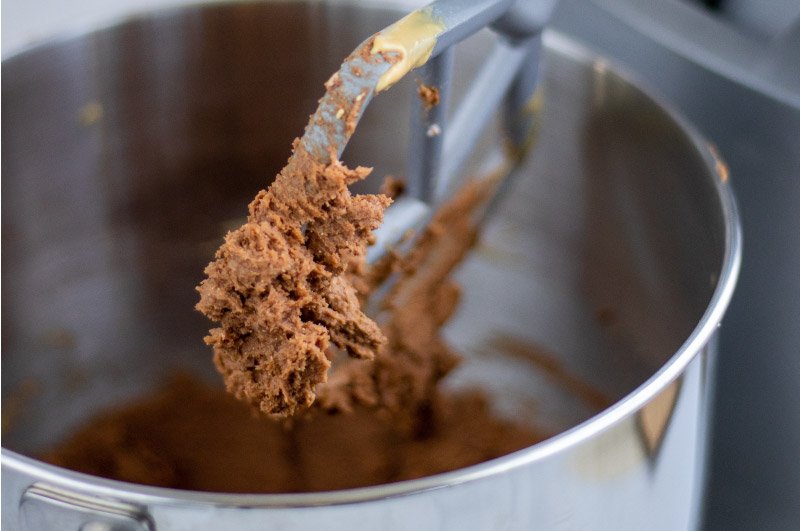 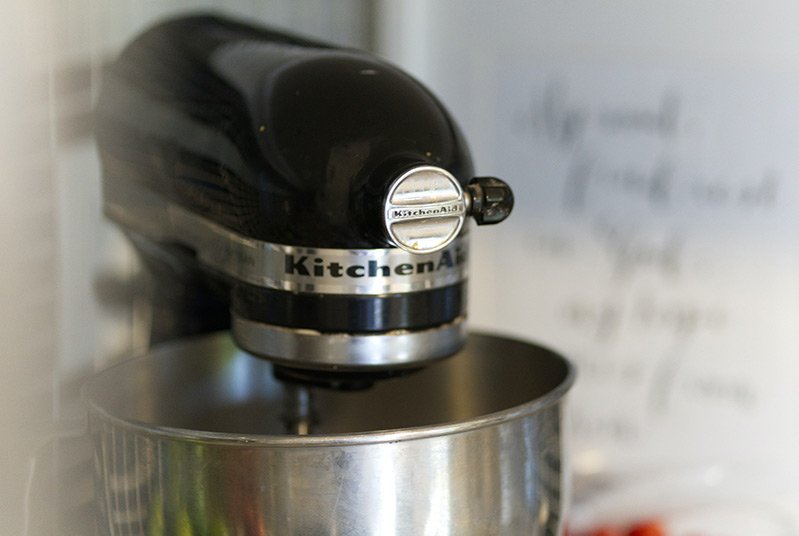 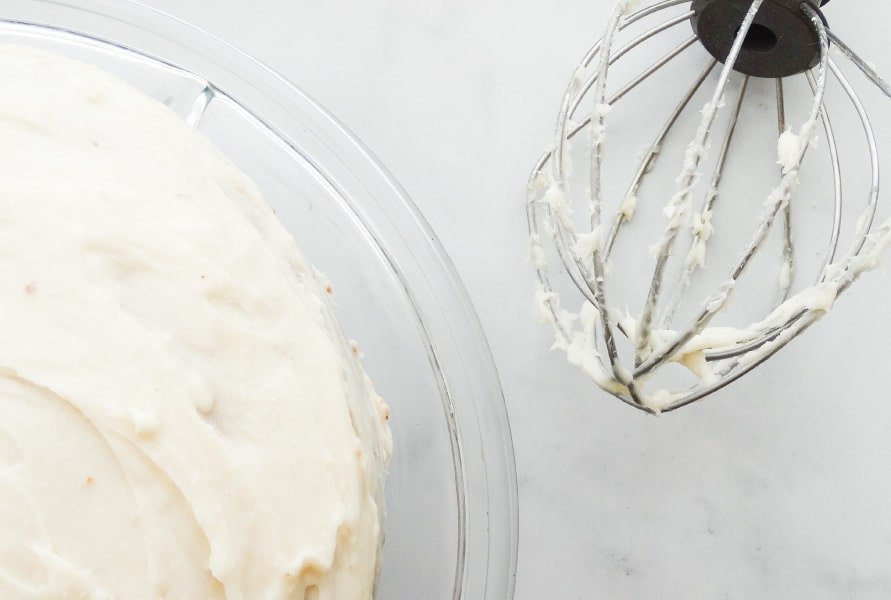